Global Warming has set to Reduce Mango Production in India 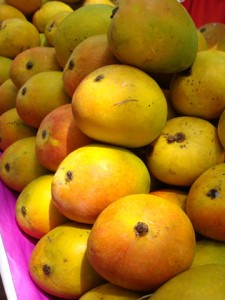 Mango rules the Indian summer and is synonymous with the season. By the end of March you can find markets flooding with different varieties of Mangoes, which goes to peak by the month of May and then the flood of mangoes slowly dies off at the end of June. This is used to be the reign of the King of fruits-Mango. However, agriculturists suspect that climate change and freak showers have considerably reduced the mango production over the years.

Areas in Chennai like T Nagar, Pondy Bazaar, Mylapore market and Koyambedu, which used to be packed to bursting with mangoes from April itself earlier, now sell mangoes only in the month of May. The delay apart, even the number of mangoes being sold in Chennai each year has come down. According to B Ramya, a market project analyst for Tamil Nadu Agriculture University (TNAU), Koyambedu market received at least 20,000 tonnes of the Banganapalli variety of mangoes last year. “But this year, the total number of Banganapalli mangoes brought into Chennai is not more than 1,000 tonnes,” she said.

VG Chittarasu, president of the Tamil Nadu Mango Growers’ Association, attributes this to the decrease in the yield of mangoes per acre over the past few years. “Four years ago, the yield averaged around 4 tons per acre,” he said. “But since then, it has decreased to 2 tons per acre. In fact, this year, the yield was only half to one ton per acre.”

The change is not merely in the yield, but also the ripening time. With each passing year, mangoes have begun to arrive in the market only late into the summer. “Earlier Chennai markets would be flooded with the Senthuram variety by the last week of March,” said Chittarasu. “May would be the time for Thotapuri and June would usher in the Neelam variety. This would mark the end of the season.” However, nowadays, Senthuram does not hit the market until mid-April and continues through the month of May. Thotapuri now arrives only in the month of June.

VC Soundarajan, a farmer from Palani and the former president of the TN Mango Growers Association, attributes these problems to erratic weather due to global warming. “Nowadays, it’s raining when it should be sunny and excessively hot when it should be raining,” he summarised. “Due to excessive heat during the flowering time, there has been very little flowering this year.” According to him, the imbalance in the weather also means that fruits are no longer ripening uniformly. “Four to five years ago, we used to sell Alphonso in the month of January itself. Now due to the climate change, that is impossible,” he said.

M Vijaykumar, the project director for Andhra Pradesh Farmers’ Federation, said the excessive heat and rain during the month of November in AP destroyed the December crop. “We usually have flowering during the months of November and Decemeber,” he said. “But this year, that was destroyed due to bad weather conditions. Surprisingly, there were no buds in January either. So the second round of flowering which takes place in February yielded only 10% of the crop. Whatever mango stock that we have now has come from a late flowering in March.”

This entry was posted in Fruit News and tagged Fruit News, special fruit. Bookmark the permalink.