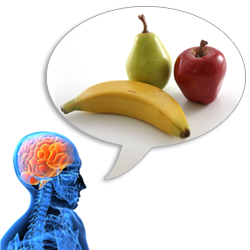 Author Linda M. Oude Greip, a postdoctoral fellow at Wageningen University in the Netherlands study said, the risk of stroke incidence was 52 percent lower for people with a high intake of white fruits and vegetables, compared to the people with a low intake.

She used data collected by the National Institute of Public Health and the Environment of the Netherlands that included more than 20,000 people. Study participants were between the ages of 20 and 65 at the start of the study, and none showed any signs of cardiovascular disease. All of the study volunteers completed a 178-item food frequency survey. The study then included 10 years of follow-up information on the participants’ health. During the follow-up period, 233 people had a stroke.

The only group that was associated with a significant decrease in stroke risk was white fruits and vegetables. Oude Greip said it’s not clear what components in white fruit might be protective for stroke, but she believes that the dietary fiber and the flavonoids play a role, where apples and pears are high in a flavonoid called quercetin.

Shapiro also pointed out; it’s difficult to single out what it is about white fruits that might reduce the risk of stroke. It’s really the whole foods. She said that she wouldn’t recommend limiting your diet to just white fruits and veggies. She added, “Eat the rainbow of fruits and vegetables”. It provides certain nutrients that combine and interplay with others.