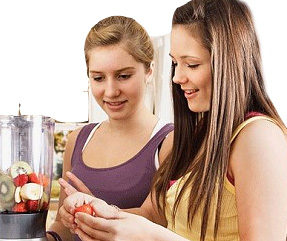 In UK; more than 90 percent of teenage girls fail to get sufficient fruits and vegetables every day. They are unable to get enough nutrition during their growing years.  These results were found by the National Diet and Nutrition Survey conducted by the Department of Health.

More than 2,000 adults and children took part in the poll with the average portions of fruits and vegetables. It rises up to 4.2 per day among adults between 19 to 65 years of age and 4.4 per day among those over 65 years.

The lack of proper diet among teenagers could affect their long term health. Chief Medical Officer, Professor Dame Sally Davies reported, “It is really important that teenagers eat a balanced diet  including eating five portions of fruit and veggies a day”. Eating healthy and being active can help prevent serious illnesses such as cancer and heart disease later in life.

This entry was posted in Fruit News and tagged fruits, veggies. Bookmark the permalink.