5 most costly fruits in the world

We would have heard of people who spend high on accessories, clothing or on some prized possessions like diamonds or cars. Nevertheless, there has been an unconventional item sold in Japan for a very expensive amount. Wondering what’s it? They are a bunch of grapes and not just any grapes – they cost US$5,400 (S$6,728).  It is not just the grapes that was quite expensive but also some of the other fruits like 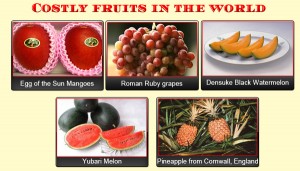 Roman Ruby grapes- The 30 Roman Ruby grapes were unloaded to a wedding lobby administrator on the first day of the purchasing season in Ishikawa realm in focal Japan.   As big as 3cm in diameter, the bunch of grapes weighed 800g. Served at the wedding hall in Kanazawa, central Ishikawa, the red-skinned grapes that cost just about $180 each is served there.

On the off chance that you think these grapes are incredibly lavish, here’s some more soil grown foods that ordered jaw-dropping costs.

Densuke Black Watermelon- Japan notorious for their exquisitely formed melons, with similar exquisite price tags, as its name suggests, the Densuke black melon with no stripes weighing up to 11kg is known to be the priciest watermelon in the world.

Yubari Melon- offered as a status symbol, these melons are grown in Yubari and Hokkaido. 3.7 kg pair of melons was sold for 1.6 million yen.

Pineapple from Cornwall, England- in order to show that England is no lesser than Japan, The pineapple was valued at around £10,000 (S$21,389).

This entry was posted in food and nutrition, Fruit-Facts, Fruitful Tips. Bookmark the permalink.