A recent study conducted says that the risk of cardiovascular disease can be reduced up to 40% by eating fruits. 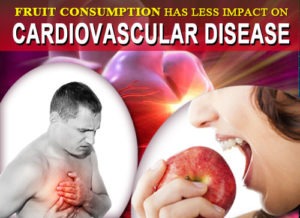 When seen some of the leading causes of death worldwide, it included ischaemic heart disease (IHD) and stroke of cardiovascular disease. Huaidong Du, a researcher has said that nutritious diet and lifestyle plays a major role in the risk reduction of cardiovascular disease, but a large part of this evidence has come from western countries and hardly few from china.

Nearly 452,000 participants were involved for this seven-year study with no history of the disease. Consumption of fruit was recorded based on five categories namely: never, monthly, one to three days per week, four to six days per week, daily.

In addition, the comparison report found that people who ate fruits had less CVD risk by 25 to 40 percent. There was a prescribed amount response affiliation between the frequency of fruit consumption and the risk of cardiovascular disease.

The data clearly states that consuming fresh fruits reduce CVD risk together with ischaemic heart disease and stroke (particularly haemorrhagic stroke). Du has also said that, compared to less or no fruit, eating some extra portions is beneficial comparatively.

The result showed the benefit of taking fruits: Patients with cardiovascular disease and hypertension- the researchers add.

Playing a vital part in cardiovascular disease, fruit consumption should not only be considered as “might be useful.”Having said all that, the researchers added to the study that, by means of educational and regulatory measures, policies are needed to promote the consumption, availability, affordability and acceptability of fresh fruit.

This entry was posted in food and nutrition, Fruit News, Fruit-Facts, Nutritional Fruits. Bookmark the permalink.